Prize for initiatives within the scope of trenchless sewer renovations

Within the scope of the fair “Ville sans tranchées”, which took place from 02. – 04th of June, 2015 in Chatou, France, the „Trophées du sans tranchées 2015”, prizes for initiatives within the scope of trenchless sewer renovations were awarded once more on the part of the scientific and technical union of France FSTT (France Sans Tranchée Technologies, anciennement Comité français pour les travaux sans tranchée).

The FSTT founded in 1990 is member of the ISTT (Internationally Society for Trenchless Technology) which represents similar unions in 20 countries and counts developers, local authority districts, engineer’s offices as well as universities from private like from the public sector to her members.

With the aim of the support of trenchless sewer renovation technologies, the trophies were already awarded for the sixth time in different categories. In the category of “enterprises” the company SADE received one of the popular awards for the application of the CMS technology from the company OSSCAD measuring the curing of the sewer without gaps. 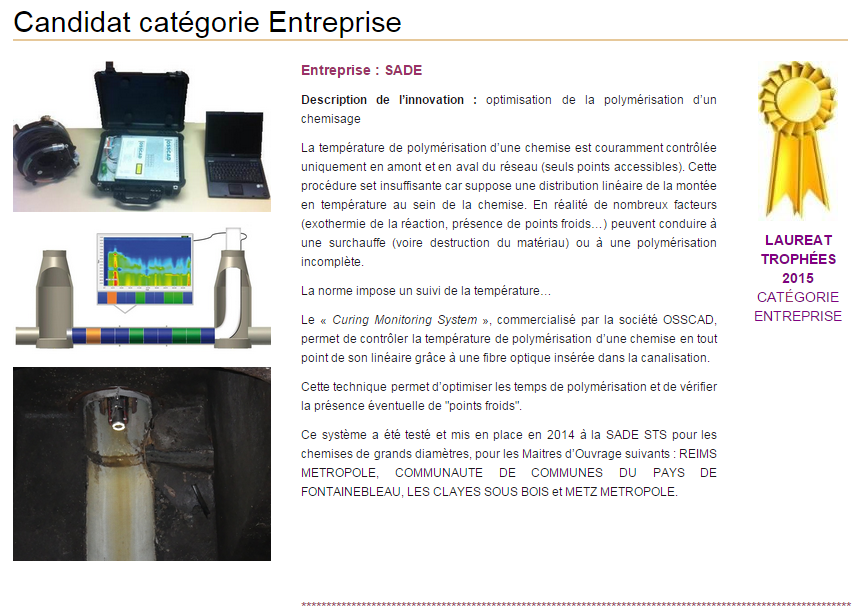